( Forewarned is Forearmed )
By Latif Yahia

As Buddha sat under the tree pondering whether he should reveal the content of his enlightenment to the world, I sit at this computer debating whether or not I should give you all this next piece of Information.
I have tried to give this piece of information to the authorities but, as always, because I am not on their payroll and they don't like what I have to say, they ignore me and disparage my credibility.
The fact is that I don’t like this information any better that the next guy, but it's the truth and it's coming. 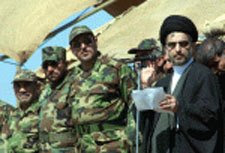 Before I begin, I want you to understand something, yes I am called a Sunni, but my mother is Kurdish and my sister married a Shia, before the American invasion in 2003 we did not have segregation. I celebrated Christmas with my Christian friends, we would make Harisa (a Shia dish made around the time of the Ashur) for the Shia festivals and eat alongside them, and there was no problem. We all lived in symbiosis, each had a place and we all just got along. Yes Saddam Hussein was called a Sunni also, but do you really believe that every person in his government and army was Sunni also? There were Kurds, Shia, Christians in his government and he was an equal opportunities killer too, he cared little for your ethnicity, just for his chair.

Since 2003 in Iraq there are Death Squads, these groups of Iranian backed Shia militias have orders to kill all Sunni Arabs in Iraq, this in itself is horrific, but it is not just the slaughtering of innocent people that is happening. These Death Squads mutilate and desecrate the corpses of their victims, some are decapitated, others have their eyes gorged out, some are killed with power tools. Why the barbarity? It is the belief of these Shia that they must bring on the second coming, the Mehidi, that the more blood they spill the quicker the onset of the second coming will be.
So far the Sunnis that have been killed are Army Officers that served during the Iran/Iraq war, any educated people, doctors, engineers, teachers, professors or Judges.
To you and I this is an unbelievable ideology, but these people believe this is the only way as you and I believe the sky is blue and George Bush is an idiot.
Osama Bin Laden is renowned for being a fundamentalist Islamist but he pales in comparison to the Mehidi Militias. When I was in the Iran/ Iraq war I saw them first hand, we had heavy tanks and artillery, they had swords and their little blue keys to paradise, and they kept coming, and coming, and coming. Eight years we fought that war and millions of lives were lost, we were strong but they feared nothing and that made them nigh on invincible. 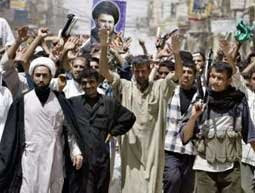 It is easy for us to sit back and look at these Mullahs and think that they are stupid or think only for their religion. These men think far in advance, while we are thinking about where we might go on holiday this year, they are thinking about how they might have to fund their army or militias in twenty years time.
In the '80's during the Iran/Iraq war, Iran sent out to the West refugees, not all of these refugees were that, in fact some of these so called refugees were actually Iranian Intelligence. They were given asylum here in the West and they lived quietly, working away and building their companies and businesses. They were given extra money by the Iranian government to buy buildings invest in the stock market etc. It is hard to estimate how much they have actually accumulated over the past twenty or so years, but certainly enough for their task ahead.
Iraqi's in general do not believe in suicide bombings, not that they don't believe in the reason behind it, just they wouldn't sacrifice themselves in that way, yes they might fight with guns at least they would have a 50/50 chance of survival, but to actually blow themselves up? No. The Iranians do.
In the past six months these Death Squads have been filtering out of Iraq through Iran with the help of the Iranian government. Why? For several reasons, they have enemies in the West that they would like exterminated, people who have in the past done or said something about the Iranian Mullahs or government. Members of the Iranian opposition, journalists that have done stories that may have put Iran in a bad light, the reasons vary but the list is there and there are over a hundred names on it.
They come to the west and apply for asylum as Iraqi Sunnis, once they have been granted asylum they start their search for the names on the list, so far these Death Squads have reached Jordan, Egypt, United Arab Emirates, Saudi Arabia, Bahrain, Oman, Yemen and Syria in the middle-East. In the West they are in the USA, Canada, Australia, Austria, UK, France, Sweden, Norway, Germany, Ireland and Cyprus.
I do not wish to cause a panic; these murderers are not here for you or your family, unless you're on the list. What is frightening is the bigger picture; Iran at this moment in time is pumping money into every Shia enclave around the world making them more powerful, why? To bring the Persian Empire back to the world. As odd as it may sound they have not forgotten or forgiven those involved in the fall of the Persian Empire and they want revenge no matter how long it may take. When the time comes they will liquefy their assets here in the west, and enable their suicide bombers and then we will know the truth of their power in the world.
At this moment in time Iran has the Jaish Al- Quds ( the Army of Jerusalem) it is 1 million strong, within it there is The Martyrs Brigade, they are 120,000 and 50% of them are here in the West they speak Arabic fluently with an Iraqi accent and have claimed asylum as Iraqi Sunnis.
The purpose of this Army is to remove Israel from the map and to return Jerusalem and the Holy land to the Muslims.

At this time it may look like America is sounding it's war drums against Iran, this is nothing but smoke and mirrors to continue the "war on Terror", America will not hit Iran at least not in the near future, they have business together albeit under the table. Like 9/11 and the Madrid bombings our governments knew of the threat but decided to ignore the warnings or to do anything about it, I am issuing you the warning so that you know.

In Iraq it is not in America's interest to try to change anything, I will give you an example, before the Invasion in 2003 there was an Iranian called Bayan jabr Solach he called himself Iraqi opposition and sat in Syria for 25 years. He was a member of the Iranian backed Al- Dahwa party, when the Americans invaded he put himself forward as advisor to Al-Badr for his militia, the Americans gave him an Iraqi name Bayan Al-Zubaidi and made him Minister of homeland security. He then proceeded to kick out all of the Sunnis in his Ministry and replace them with people from the Al-Badr militia; he also employed 1,500 Al-Badr devotees in the Iraqi police force, giving them all high ranking positions. 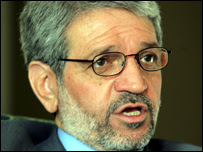 Each Iraqi official has two American advisors that are constantly by their side, when Al-Zubaidi formed his death squads these American Advisors took the news to the American government, the Foreign Minister, the CIA and the Pentagon, they believed that Al-Zubaidi would be removed from the Iraqi Interim government, unfortunately they were told it was none of their business and were removed from their positions. Their names are; Mark Karm and the other Rick Clay, they were rewarded for their honesty and honour by being suspended from their jobs and recalled to America.
After the Elections in Iraq AL-Zubaidi was made finance Minister and repeated the process of ethnically cleansing the Sunnis from his new Ministry. In addition he opened the 10th floor of his Ministry as a place of torture and murder.
He also completely forgot his 25 years in Syria and now condemns the Syrians for letting the "terrorists" through their borders.
On a different note he also holds both British and American citizenship. 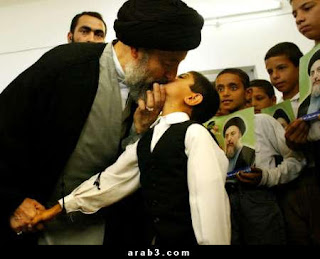 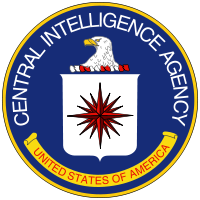 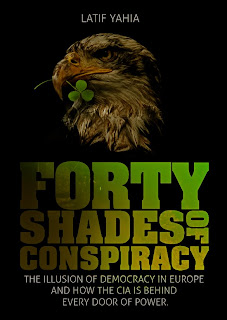 After my escape from Iraq, Vienna was my first home in the West, it was a beautiful and magical place but I will always have mixed memories. I traveled extensively throughout Europe, sometimes for pleasure but mostly in necessity, it was a tumultuous time which I retell in "The Black Hole" Europe unfortunately was not the haven or heaven which I had hoped for.
With Saddam and Uday searching for me, I also found myself fleeing the CIA, I was a mouse caught between a cat and a snare."The Black Hole" has been banned in Irish and US bookstores because it spotlights the CIA's policies of secret prisons and rendition in a time before 9/11. .. The Black Hole ordered from this site@
www.arcanummediagroup.com